“We wear bathing suits. That is our uniform. They are not cute or girly…” 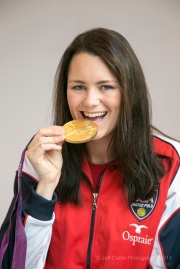 Two-time US Olympic Water Polo Player, Jessica Steffens shares a piece of her story as an Olympic athlete. Steffens speaks eloquently about what it is to be an athlete, teammate, and a strong woman. She shines some light on one of the most successful US National Teams in US Olympic Water Polo. A big thank you to Jessica for the interview.

Tell us a little bit about your Olympic career. Explain the type of training and hard work it took to make it to the podium as a gold medalist.

Training for the Olympics is an incredible experience that requires extreme focus on the goal and complete dedication to your team. Not only does this mean showing up and being prepared for all practices, it means making sacrifices elsewhere to make sure that you are at your best for your team. 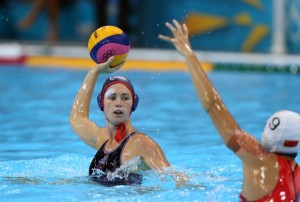 In full time training a year and a half before the Olympics, we train 6 hours a day at least 5 days a week and that does not include physical therapy and rehab. We travel for up to 5 weeks at a time to amazing places, but sometimes we have to pack all of our own food due to drug testing rules and regulations. We wear weight belts in the pool, do crazy (1.5 hour) swim and leg workouts, and (1.5 hour) lifts 4 days a week on top of normal skills and team strategy trainings. Let’s just say that it is a huge time and mental commitment to your team, but in the end, it is so worth it. Whether you are the alternate or walking in Opening Ceremonies, we as a team get each other to the Olympics and prepare each other to compete with the best in the world. I was fortunate enough to emerge from both Olympics with medals around my neck, but I truly believe that it is the work of an entire team and support network that allowed us to be standing there looking at the crowd. I am now fully addicted to the Olympic attitude and atmosphere, it is invigorating.

Tell us about some of the differences between a small sport and small athlete, versus a big athlete and big sport at the Olympics. What impact does being a female sports team have on this?

I think you mean a small sport is a lesser known or less popular sport and yes, water polo definitely qualifies in this category although I know that it is popular during the Olympics. What fans don’t realize is that we compete all year, every year, we don’t go into hibernation during the three years leading up to the Olympics. In fact, the USA women’s water polo team (from the last 10-15 years) is one of the most decorated water polo teams of all times, including men’s teams. The Women’s USA team is the only women’s national team to win a medal in every Olympics that the sport has participated in. This brings up an interesting point as well, because often times, men get decent exposure and financial compensation as professional athletes, while the women are traditionally less fabled in the media and not able to earn equal amounts internationally. You read about this in the corporate structure, but it happens in sports as well. Women are not necessarily punished for playing such an aggressive sport, but I think that the outside world prefers to reward and idolize the men’s game and worry about how “dirty” the women’s game is. We see it differently. Because men are so strong, so much of their game is a testament to physical strength, while the women’s game has so much more movement involved.

Tell us a little bit about some of the apparel issues that come with playing Water Polo. How do you feel this takes away from the sport? and how does the media play a role in this?

We wear bathing suits. That is our uniform. They are not cute or girly, we first and foremost wear suits that are functional.

We are a national team so we always want to demonstrate that on our uniforms through color and design, but we always defer to function first. As with any contact sport, the uniform is going to move, get touched, grabbed, or break and that is just the nature of sports. It is unfortunate for us when the media or viewers get so caught up in uniform malfunctions that the nature of the game is diminished. Suit manufacturers have attempted to solve this problem by adding legs or arms to the uniform, but these additions limit our ability to move fluidly in the water. Water polo players need full rotation in both shoulder and hip joints, which makes any restrictions difficult; it is unlike any other sport. There are definitely distractions due to our uniforms, imagine all of the things you have to do to prepare for a day at the beach. Additionally, the suits can rip, break, and pull in uncomfortable places. We train to prepare for anything so this mental focus allows us to do what we need to do to prepare, without losing our sight on the ultimate goal of the game.

On the Olympic stage, did you feel the media’s presence had an impact on how some of the athletes presented themselves i.e. makeup, style of dress, hair, etc.?

Yes of course. Anytime there are cameras on, men and women are going to be conscious of what they look like. I think water polo players especially because most people see us only with our caps on and with mouth guards in. But as I mentioned before, we are elite athletes and we mentally train to do what we need to do to expose the sport, grow the interest and then return to our jobs in the pool. I will say that most athletes at the Olympics show tons of pride for their country. We typically, for a big event, will get flags painted on our nails or wear only red, white and blue to show our team spirit and pride in our country. We are conscious of the cameras, but we prepare ahead of time (like long-lasting nail polish) so that when it comes to game days we don’t think about it.

How did you feel about the US Olympic Polo Team being requested and deciding to pose in ESPN’s Body Issue?

This is an interesting question since I was not in this photo, but in general, the athletes presented in this yearly issue are incredibly talented and strong role models. It allows the normal population to see in an athlete’s body, all of the hard work and dedication that goes into being an elite competitor. It was an honor for my team to be in this magazine, but we want to someday be on the cover without having to remove our clothes. I mean isn’t a small swimsuit enough?

Now that you have retired from US Olympic Water Polo, tell us what you’re doing now. How has getting out of the pool impacted your fitness level, and has it caused you to reflect on all the effort it took to be an Olympian?

It is extremely difficult to transition to civilian life after a lifetime of training. I am used to having a coach and teammates to support me and for me to support. It is definitely isolating to now be out on my own, but it is fun to rediscover the activities that I inherently enjoy. Now I

don’t lift, but I do weekly yoga classes and pull-ups and lunges during my runs. I swim in the SF Bay, which is freezing, but so incredible because nobody knows who I am and everyone out there truly enjoys the water; it is a very raw experience. I really miss my muscled, strong body, but even though I am a little softer than I was while training, I still pride myself on being a strong woman. 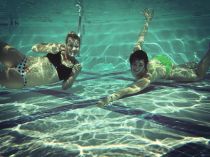 I want to carry my own bags, walk to work, make it up a tall mountain, and enjoy an open water swim enough to help the unsure swimmers accomplish their goals. I try to maintain my “in-training” mindset in my normal life as far as a healthy diet and lifestyle, but I have definitely taken a step down in intensity. I know that someday I will return to that ultimate focus, until then, I am enjoying a civilian lifestyle where I can stay up late or play soccer just because I want to.

2 thoughts on ““We wear bathing suits. That is our uniform. They are not cute or girly…””