You are a female athlete. You play sports. You workout. Yet, you rarely identify with the images of “female athletes” portrayed by “fitness” models in the media. Welcome to MillyMaker a blog that speaks to a  more realistic image of the female athlete – real women who sweat,  women who are playing the game not to look beautiful but to compete, women, who like men, are athletes and are entitled to that same title of “athlete,” free of the female stereotype.

dMill, dMilly, Milly, D; that’s me. My given name is Danielle. I am a daughter, a sister, a fiancee, a co-worker, a friend, a lifelong teammate, and an athlete. I have 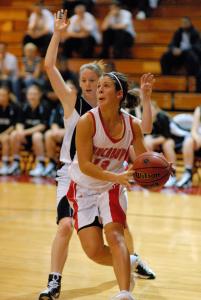 played sports since I was 4 starting out on the T-Ball diamond, advancing to the swarm that is little league soccer, and then in 4th grade I started playing basketball. I played some other sports along the way, softball and swimming, to name a few, but basketball was always my true love.

I played all through elementary school and middle school in different rec leagues, and made my high school freshmen team. I quickly realized that I would need to exponentially improve if I wanted to continue my high school career. After my freshmen season, I enrolled in a basketball training program, Game Time Skills (“GTS”), who I worked with 3 days a week, and during my summers. I would call GTS home for the greater duration of high school and the

people I met through GTS would become some of my closest friends. I learned how to play basketball: I learned the fundamentals, skill sets, and the conditioning that it took to be an elite player. Most importantly I learned the mentality it took to be an athlete; a mentality that wouldn’t allow your body to give up when your brain was telling you to call it quits, a mentality that you could do anything if you worked hard enough.  As a result my hard work paid off. Those summers, those people stuck with me throughout my high school and collegiate basketball career. I ended up making the Varsity high school team my junior year and then went on to play basketball at the Division III level at Lynchburg College.

expectations I was good enough, I did make the team, I did accomplish my goals and play in college. Was I the greatest player to ever play at Lynchburg? No. But to me, I became something that so many people never thought I would. MillyMaker is about sharing the stories and images of female athletes that are more representative of that girl and all the girls whose story has never been told. That girl, that worked her ass off. That girl, that was stronger and faster than everyone because she had to be; she was too short or too tiny. That girl, who overcame the odds. That girl. I never wanted to rock a bow or wear the color pink, because frankly I didn’t and still don’t like those things. MillyMaker is about representing that girl and all the girls that I competed with and against throughout the years, that didn’t identify with the media’s portrayal of female athletes that didn’t get to share their story because they didn’t fit the mold. MillyMaker is about sharing those untold stories.