Brutes vs. Bombshells – The Truth about Women’s Tackle and Lingerie Football – Part 3 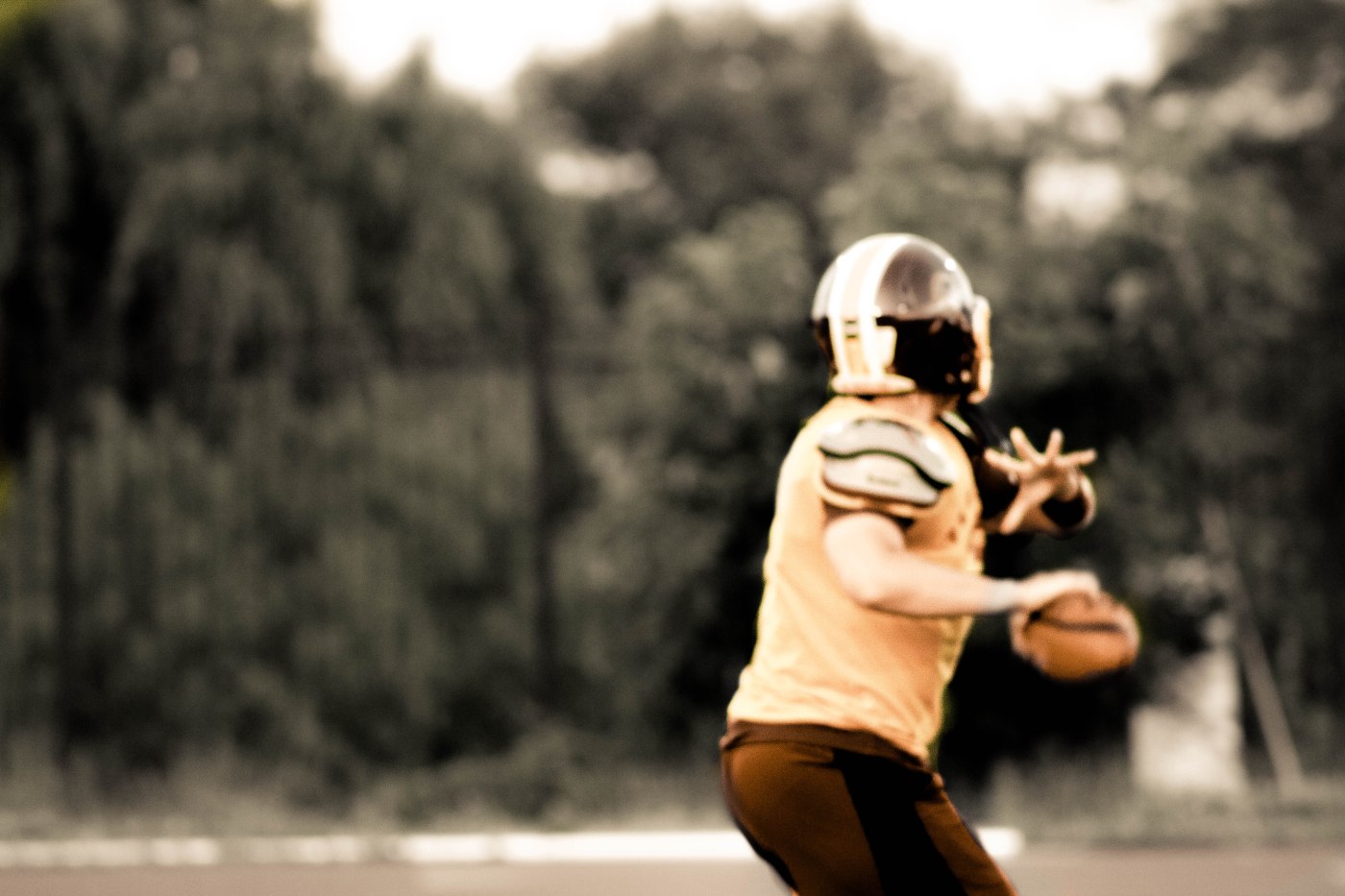 Question: Tell us about your participation in the LFL and the WFA.

Answer: I first found the DC Divas, a WFA team. Full pads, NFL rules, 11 on 11 real deal football. I checked out the roster and saw they had a lineman that was 370 lbs and 6’7″. Given my football experience, and being 5’8″ and 140 lbs, LFL seemed like the no-brainer option for me. I started out by marketing myself to the coaches and commissioner of the LFL. I made a couple of videos to show my dedication to the goal of making the Baltimore team, and hired a trainer, Eddie Mason and Mike Lansdowne of Mase Training in VA to help me achieve that goal. Eddie Mason is a former linebacker for the Washington Redskins and I figured, who better to teach me how to play football? Lansdowne taught me to be fast-er… haha I wasn’t fast.

After having my vi

deos viewed by tens of thousands of people and picked up by Deadspin, I was being contacted by the coaches of the Baltimore Charm asking me to attend the off-season workouts. I was nervous. I had never touched a football, watched a full game or even worked out before and here I am trying to beat out hundreds of girls for a position that they may
have been working at most of their adult life. About 3 weeks before tryouts, I was running a few linebacker contact drills with Eddie. When I went to push-off in pursuit of a run play, my knee buckled. I shook it off, limped back to start the drill again, and ignored it. The next day, I was fine. It was two weeks before tryouts and I was at practice with the team. FINALLY! We were running routes and doing football stuff, I was amped. My first route: a slant. As soon as I planted my outside foot, my knee buckled again. This time it hurt and I was pretty scared. I couldn’t even walk off the field on my own. I was reassured when coach told me to take it easy until tryouts and not to worry about it, he wanted me to play and said that I had earned a spot on the team. I watched 270 girls tryout that day. There were 21 spots available. I’ll never forget the phone call from my doctor telling me that I had not only completely torn my ACL, but also my lateral meniscus and I wasn’t going to be able to play for at least 6 months. Surgery was the only option. I cried. A lot. I continued to attend every practice, I was never late, and even 3 days following my surgery, I was sitting on the field popping pain killers with my knee in a continuous passive motion machine taking as many mental notes as I could. I worked really hard at getting back on the field earlier than 6-8 months typically required for this type of injury. I was cleared to play in just 5 months and was told I would be playing in the final regular season game. The day before that game, coach moved me to the inactive roster. I was pissed. The next morning, while all the girls were on the bus headed to Canada, I was at the DC Divas 2nd try out. I took off all my make-up, pulled my hair back and wore long sleeves and pants. There was no way I wanted those girls finding out I came from the LFL. All my hard work showed in my try out and for the first time, I felt it was seen. I came to the first official practice of the Divas early that December and while it was pretty brutal, I loved it. This is where I belonged. I kept my LFL history under wraps for as long as I could, but I’m guessing someone googled me and found out what I had been hiding. In addition to that, my rookie status exposed the true physicality of my new-found love. I was placed at tight end and the nationally ranked Diva vets showed me the way. That first no-pads tackle terrified me. However, I took it and got right back up to do it again. It took a while, but my perseverance earned me a spot and the Divas started to feel like my family. Practices were 2-3 times per week for a couple of hours a night. Most of us had full-time jobs, kids and families to care for. We were students, EMT’s, homicide detectives, lawyers and female football players. I felt like I was a part of something with the WFA. The Divas kept me at tight end and our (and my) first game was coming up in April, a year since my ACL surgery. We were at practice about 2 weeks before our season opener, and in the same pursuit drill as the year prior, I tore my ACL…again, and this time it was both knees. I knew immediately and I was extremely angry. I went through the whole process again; doctor, MRI, surgery, rehab. I continued to support the Divas at all of the games, practices and events. I donated my extra player fees to my teammates having trouble paying them and tried to set up events to help draw attention to these amazing women.

I still have yet to repair my 2nd tear to my right knee. Playing, at this point, is just more than I can afford. After 2.5 years of training, practicing and learning, 3 ACL tears, 2 surgeries and countless months of rehab, I never made it to play in a game for either league.

Question: What beauty and fitness requirements did you have to meet in order to play in the LFL?

Answer: From my own experience, if you weren’t as pretty in the face as the other girls on the team, your body had to be incredible. Of course, I loved all of my teammates, they were all good people and gorgeous to me, but if the commissioner didn’t find you marketable, it could become difficult for you to play. Some of the girls were pulled aside and told to work on their body. I was specifically told to reduce the size of my legs. I’ve always had big thighs, but because I wanted to make the active roster, I lost 2″ on my legs within 8 weeks, and I was still told it wasn’t enough. Try-outs were a mental beating. Between the sprinting, the 100+ push-ups, and drill sergeant type screaming, girls dropped like flies. Practices were a grueling 6 hours every Saturday and Sunday and we had a trainer that would condition us for hour

s at a time, sometimes more if people were late or didn’t come to practice.

Question: Why did you leave the LFL and what made you transition to the WFA?

Answer: The overall vibe of the LFL was competitive, but it was internal. It felt cutthroat and for being a 30-year-old woman, it wasn’t what I was looking for. I found a family in the Divas, people who had my back even off the field. Had I known that prior, I probably never would have started with the LFL.

Question: What was the biggest difference between playing in the LFL vs. the WFA?

Answer: When I was playing, both leagues were “pay to play”. The LFL players paid $45 for the season. The league provided all of their travel, uniforms and warm-ups.

WFA was much steeper in cost. Players were paying $1000+ per season to cover travel, lodging and uniforms. The nice thing about the Divas was that for every dollar in ticket sales, we were able to apply that to our player’s fees. Well connected players usually didn’t have a problem reaching their fees before the first kick-off and our GM would set up events that would help us sell tickets. The business model is very different between the two, but the level of (or should I say “lack of”) respect in the LFL isn’t even comparable to the WFA.

Question: Were there any common stereotypes that you faced playing in the LFL and women’s tackle football league?

Question: What type of role models does the LFL give to young girls vs. the WFA/IWFL?

Answer: I’ll start by saying, I have a son, and he is 11 now. When I started all of this, he was 6. Not once did he ever think poorly of me for being a part of the LFL or WFA. If anything, it’s opened his eyes to the world of female athletes. I don’t believe a role model is defined by what they wear. A role model, to me, is someone who makes sound decisions, knows how to be a leader AND a follower, and remains positive. I can do that in a sports bra and boy shorts AND a full pad football uniform.

Question: How strong were you when you played in the LFL vs the WFA? and how did stereotypical images of what the female body should look like make you feel?

Answer: My body image has never been something I have been uncomfortable with, I guess that’s easy for me to say. I am pretty average in size. Only when I feel unhealthy, whether that’s because I haven’t worked out or I’ve made poor nutritional choices, do I decide it’s time for a change. It’s always for me and only me.

Question: How do you feel about women’s sports in today’s media?

Answer:Referring to football only, I am still amazed that the general public isn’t aware of the WFA. There are 60+ teams across the country and international games, yet we are still explaining who we are.

The athletes that play in the IWFL and WFA are told that they are not tough enough to play football, the women who play in the LFL are told that they are not athletes because of their uniform. From all three leagues, players spoke about how their teams are like family. That they love what they do, and would do it forever if they could. These women are passionate about women’s professional football.

What if all three leagues united to form one women’s football league? A united front, all of these exceptional female athletes working towards one thing, putting women’s professional football on the map.

Women are objectified when they are forced to showcase their bodies in order to receive attention in the sports arena. We are so much more than a rocking body and a pretty face. Your body or your beauty should not be the focal point it should not be what draws crowds to games. Be respected for your talent, draw crowds for your athleticism. Be more than beautiful, be more than sexy, be more than an object, be an athlete.